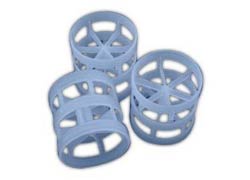 Raschig rings are pieces of tube (approximately equal in length and diameter) used in large numbers as a packed bed within columns for distillations and other chemical engineering processes. They are usually provide a large surface area within the volume of the column for interaction between liquid and gas.

They form what is now known as random packing, and enabled Raschig to perform distillations of much greater efficiency than his competitors using fractional distillation columns with trays.

In a distillation column, the reflux or condensed vapour runs down the column, covering the surfaces of the rings, while vapour from the reboiler goes up the column. As the vapour and liquid pass each other countercurrently in a small space, they tend towards equilibrium. Thus less volatile material tends to go downwards, more volatile material upwards.

They are also used for devices where gas and liquid are put in contact for purposes of gas absorption, stripping or chemical reaction, and as a support for biofilms in biological reactors.